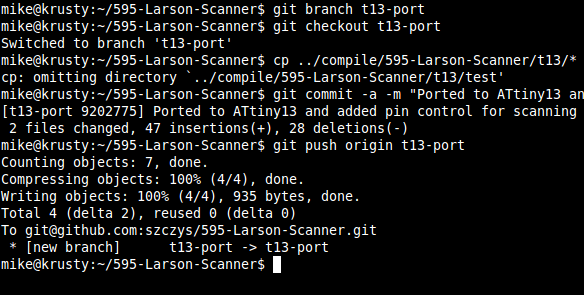 I’ve been getting better at using Git in smart ways, but recently I did something a bit dumb. Instead of branching my code to port over to a different chip, I just make a copy of it into a directory not under version control. The issue I have now is how to add it to the repository as a separate branch. Since I’m not too far away from where I started, the answer is simple:

I’m going to create a new branch and replace the controlled files with the ones I previously edited. This is done with the following steps:

That’s it. I made a new branch, altered a file, and commited it to that branch, then pushed the change to the remote repository. There’s a lot more about working with branches at the Git Book.