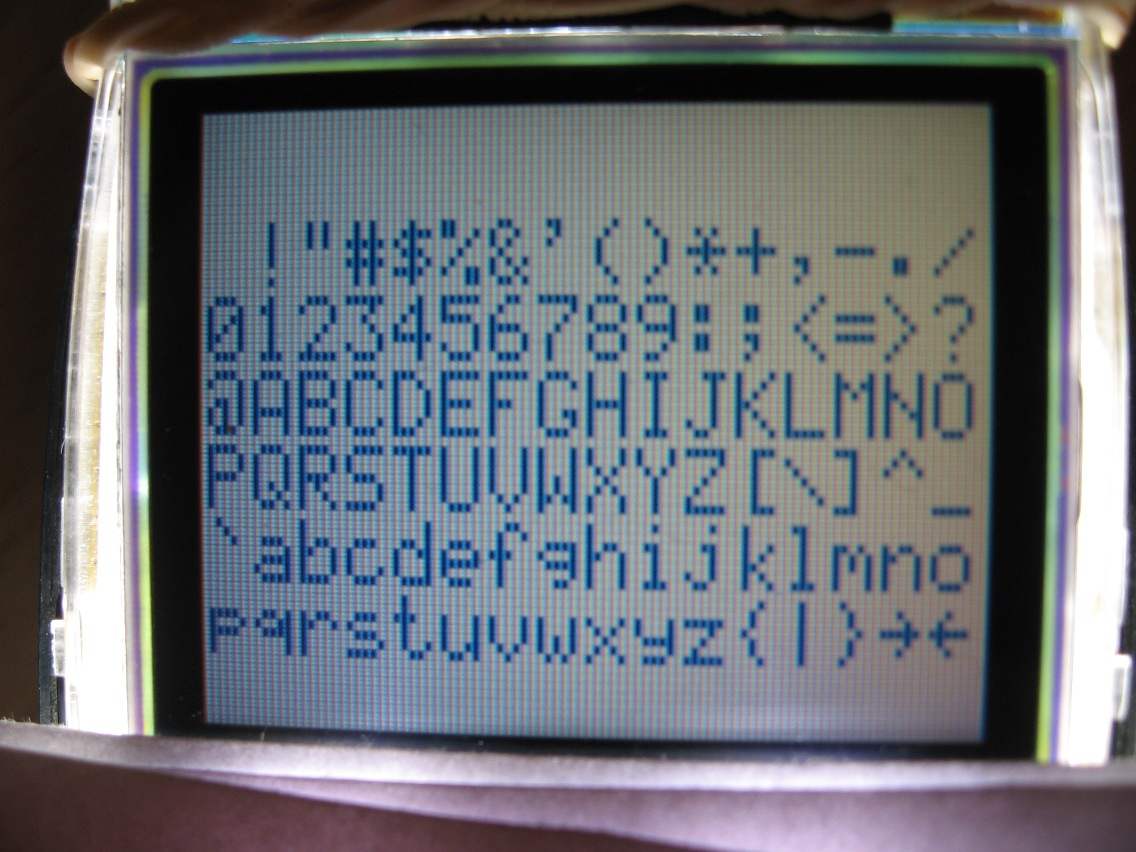 Here you can see the full ASCII character set displayed on the 3595 lcd. It was actually amazingly simple to get to this point from the previous “helloworld” firmware.

The most important change that was made is that I upgraded to an ATmega168 to solve my programming space problem. This chip will still operate at 3.3v which is the operating voltage of the LCD. The additional 14kb of programming space should give me plenty of room to grow. I would also like to dabble with SD card compatibility and this chip should allow me to do so (I’ve never looked into it so I may be wrong).

I’ll provide more details in my next update. 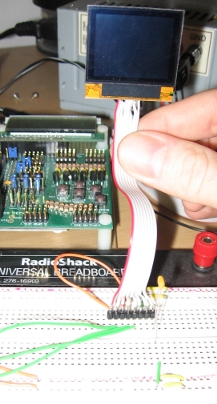 LCD from Nokia 3595 connected to breadboard (not working)

I did do a bit of work with the 3595 lcd screen.  I’ve got the circuit hooked up as I think it should and I ported the mega8 code for a tiny2313.  Once everything was fired up I get nothing.

In order to fit the mega8 code in the 1k programming space of the smaller chip I had to take out everything related to strings.  This should not have broken the initialization of the screen itself so I try to do a full write and full clear but I can see not response from the display.  I took a look at the datasheet for controller in this board; initialization is quite complicated require setup not only of the data in memory but the power supply built into the controller.  I’m putting this one on the back burner for a while.

Feel free to leave comments if you have any advice.  I might try to build an oscilloscope (or an interface to use my computer as one) before I continue.  Without it I’m kind of flying blind with getting this working.

Here’s a big project.  Right now I’m scouring the interwebs for info from folks who have already done this.  I think this may be extremely difficult due to the fact that I don’t have an oscilloscope.  Here’s some links that I’ve dredged up:

This is the most promising link.  If I can port this over to the ATtiny2313 I should be able to make this happen.  I need to port it because I don’t have any of the mega8L on hand (low voltage mega8 chips) but the tiny2313 will run at 8mHz with only 3v.  This is necessary because the LCD has a max voltage of 4v.