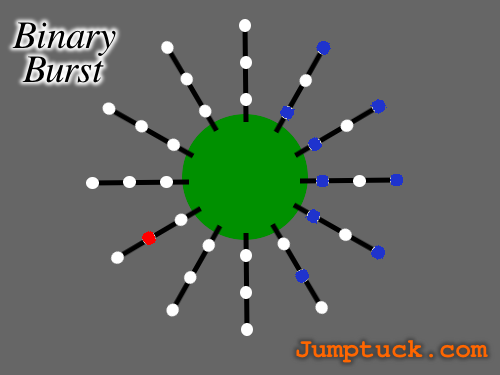 I’ve been working on a new clock concept and am far enough along to start sharing some details about it. I call it the Binary Burst. The latter is because I was inspired by some vintage starburst clocks and have settled on twelve spires as a reminder of that design. The binary moniker is because the readout will utilize binary code.

The illustration above shows my intended design. The time shown is 8:22. Each spire reads the minutes in binary shown as three bits made up of blue LEDs. The hour is noted as a red LED on the corresponding spire. If you saw the previous post about balancing the LEDs you may have figured out that the middle LED is a red/blue bicolor, with the rest being single blue. They are 5mm diffused packages that appear cloudy white when not illuminated. There should be some room for alternate display modes, but I’ll need to get working hardware in hand before I figure that out.

I spent a large amount of time over the Christmas break designing the circuit and laying out the board. This evening I ordered parts for four clocks. When they arrive, I’ll check that the footprints work and send the files off to a fab house for manufacturing. This is my first professionally fabricated PCB and I’ve put a lot of extra time in to make sure the design is up to snuff.