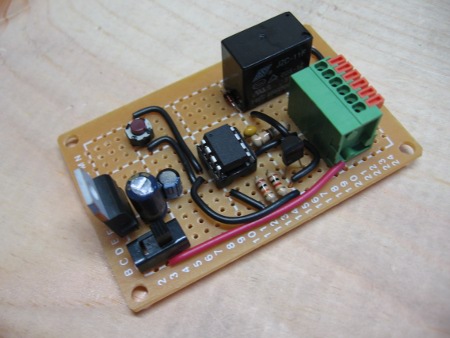 Behold, I’ve finished building a combination lock for my garage door. I’ve told a few of my friends about it and I get the “you know you can buy those, right?” responses. But no, you can’t. This is a single button code lock for a garage door. I got the idea from Alan Parekh’s project (called Button Code) and decided to build by own based around an ATtiny13 microcontroller. Join me after the break for all the details and remember, if you’re lazy you can always buy a kit that will do this from Alan.

Alan’s interface method is what I was so interested in. Take a look at his video for the explanation. I would need a button and an LED for the interface but I’m doing things just a little bit differently than he did.

I wanted to use an ATtiny13 microcontroller because I had ordered a half dozen a few years ago and still had most of them sitting around. This meant I would need to fit the code into less than 1024 bytes of programming space. I downloaded Alan’s code thinking it might be in C but it turned out to be BASIC so I decided to write my own from the ground up. I did start with my favorite Danni Debounce code (written by Peter Dannegger) to handle the button presses and coded a prototype using an ATmega168. Here’s how it works: 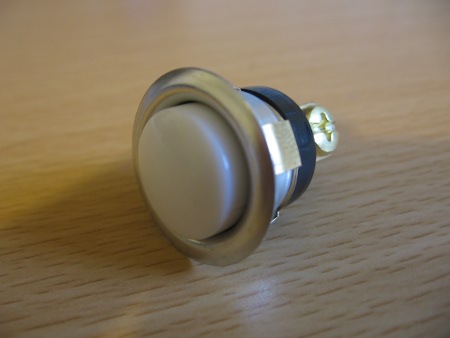 I started with a doorbell I picked up from the Home Depot. It’s lighted so I knew there must be room for some kind of bulb inside. 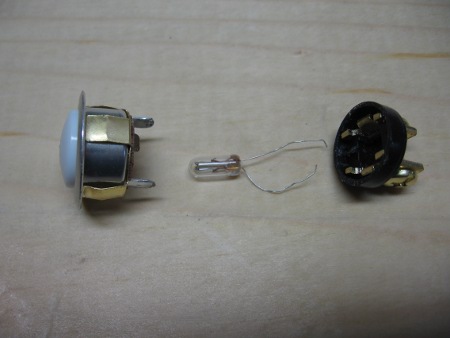 The bulb is incandescent and leeches off of the 16V transformer that doorbells use. I disassembled the unit and removed the bulb. It’s a bit smaller than an LED but I wagered I’d be able to make things work.

I used a PCB drill bit in my Dremel drill press to add holes for the LED leads. 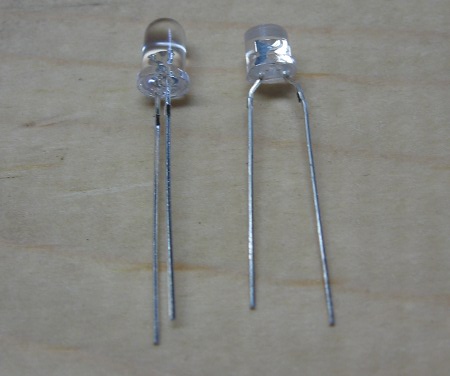 After a bit of trial and error I discovered that the LED body was just a bit too big. You can see that the LED on the right has had the dome cut off. This reduced the brightness of the crystal clear body but sometimes sacrifices have to be made. 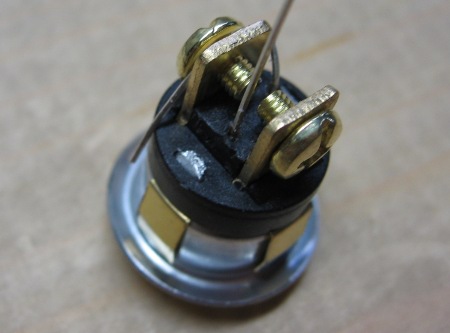 Here’s the reassembled doorbell. I’ve attached the negative lead to what will be the negative terminal of the button. After clipping off the excess, this doorbell will nest itself in a 5/8″ hole quite nicely.

Here’s the assembled board. I used spring terminals for the connections. I’m planning on using single conductor wire for the button and opener connections so these will do. 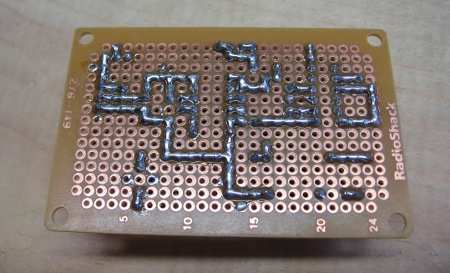 Here’s a view of the soldered traces. This project was right on the cusp of being too simple to design and etch a board, and too complex to take the time to build with protoboard. Soldering probably came in between 1.5 and 2.5 hours. 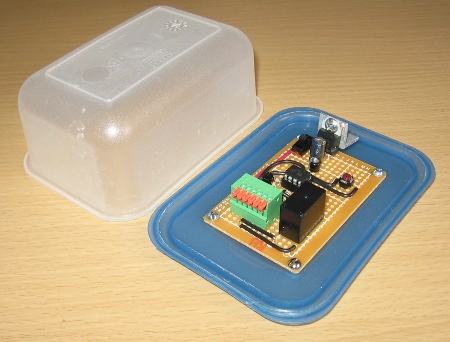 Ikea helped me out with an enclosure. This came with a set of storage containers and has already been heavily used for food. Now it’s got a new life. I don’t think I need a heat sink for the voltage regulator but I came across a small piece of threaded aluminum angle bracket from an old project so I threw it in. 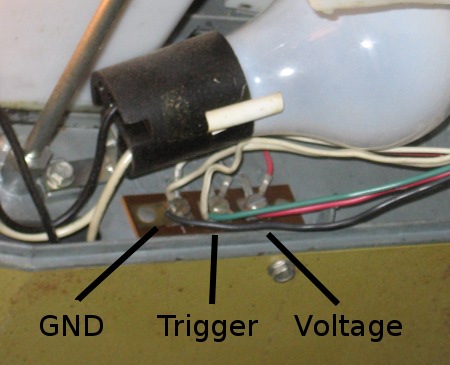 My garage door opener is quite old, but it has the connections I need. I measured 34V which is right at the top of my acceptable input voltage for the LM7805 regulator. I figured out what each of these terminals is for by studying the aftermarket wireless opener module that attaches here. 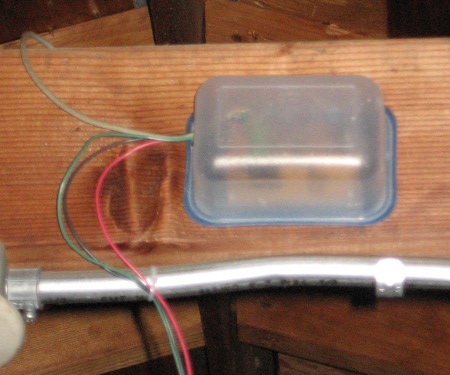 The little board is quite happy up in the rafters. I reused a run of abandoned telephone wiring from the basement. It’s the grey wire running up and out to the doorbell which is in the outer jam. The green, black, and red wires are 20 awg solid hookup wire I had laying around.

And here’s the button. Inconspicuous and handy all at the same time.

I had many of the parts I needed on hand. That being said, the ‘expensive’ ones I did order from SparkFun, paying just $4.41 for shipping (and the package came quite quickly). I would say my total out-of-pocket on this project was $21.50 because I ordered some extra parts for future projects. In my mind, that’s a steal just for the entertainment value of the project. 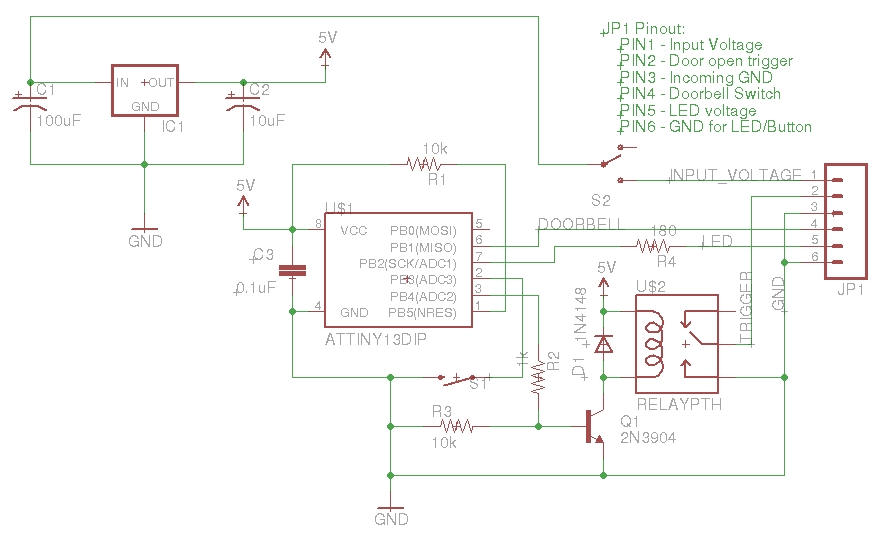 It works like a charm! I didn’t have room for the code needed to put the chip to sleep and wake it with a pin interrupt. I measured the prototype and got a 7.68 mA current draw when idle so I’m not too concerned about waste. I may try rewriting the code so that there is a hardcoded “program mode” passcode. In other words, if you want to reset the entry code you don’t have to climb up on a ladder and press the button inside, you just use the doorbell to input the programming passcode. This could be made an impossible number since each of the four digits can be up to 255 (they’re an array of unsigned chars). But I digress, I had fun and accomplished my goals for just a few dollars in parts. Success!