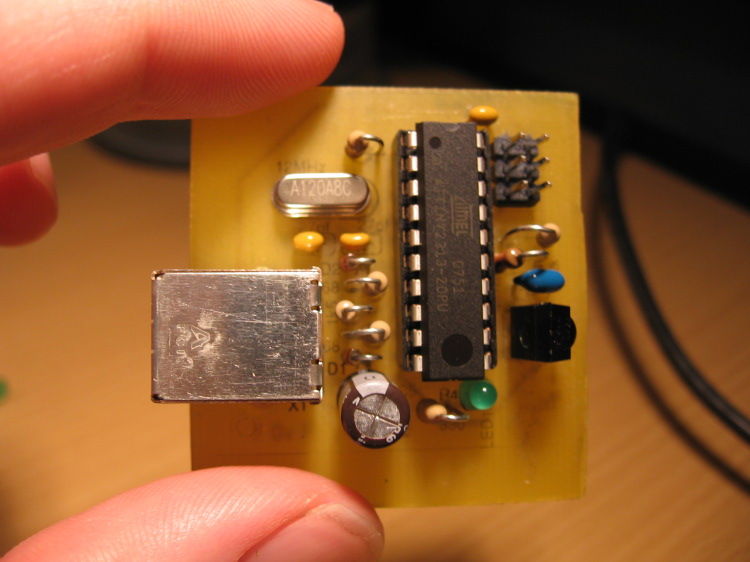 I have a mythtv box and it has pretty much changed the way I watch TV. Now I’m no longer tied down to the schedule set forth by the different channels. This is especially nice since I work at night and would not otherwise be home for prime time TV.

One of the biggest hurdles for the mythTV community seems to be providing an IR receiver so that you can use your remote control with it. I had been using a serial ir receiver but decided to try building my own USB receiver. This is based on the work by Dick Streefland found here: http://www.xs4all.nl/~dicks/avr/usbtiny/

I used his firmware but changed up the hardward just a bit. First off, the TSOP1738 is now obsolete so I had to find a replacement part for that. I also tweaked the setup used for the USB interface based on the schematics for the USBtinyISP by Ladyada.

Here is a pretty messy schematic of the circuit. As I said before I fused together the work that Dick did for the project with the USB interface from Ladyada’s design. There is also a bit of difference with the new IR Module as I added the filtering capacitor and resistor that were recommended in the datasheet.

Here is the component layout to assist in the assembly of the PCB.

Firmware: I used the main.hex file in the “ir” folder of Dick Streefland’s usbtiny-1.4 package. Get it here.
Software: When setting up LIRC you should choose the “igorplugusb” device driver.